There are more questions than answers about the new joint BBC-ITV Freesat project.

Main article: All about Freesat - ukfree.tv

There are more questions than answers about the new joint BBC-ITV Freesat project. 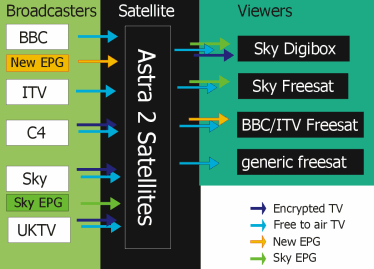 What we do know is that it will use the existing free-to-air BBC transmissions from the Astra 2 satellites. ITV will stop using Sky's encryption services and broadcast free-to-air from the same satellites.

There is no point in doubling the cost of transmission of the 45 regional and national BBC and ITV-1 services by replicating them on another satellite system.

BBC/ITV Freesat service will have a separate electronic programme guide (EPG), which will allow any channel already broadcasting free-to-air on digital satellite to join. If BBC/ITV Freesat will have the same channel numbers as Sky Freesat or Freeview, and who can instigate future changes is not yet clear.

No decision has been taken to mandate the use of OpenTV operating software as Sky use, the inclusion of a modem and subscription card slots. Without all three of these, BBC/ITV Freesat boxes could not be upgraded to Sky's subscription services.

All of the satellite's existing interactive services are written using the OpenTV software. Without this relatively expensive and propriety software in each set-top box, providers of interactive television channels will have to duplicate their code to work on both Sky and BBC/ITV channels.

As new software wouldnt need to pass Skys approval system, this could reduce the development time.

Briantist's 38,844 posts
H
Hayley
9:49 AM
For some reason, we have lost BBCHD from view.
We are in France and to get HD channels (the free ones) through a Pace HD receiver (at least 5 year old box).
We watch all other free channels view our Sky Box and regular sky card (no subscription) as we couldn't get the freeHD channels working when we had a SKYHD box (why?)
Do I need to download some software to the Pace HD receiver to get BBCHD back again (we can get ITVHD,CH4HD ok on it).
We don't use the Pace HD receiver to view all channels because the menu and remote are too muddled and not clear to view like the Sky box . Thanks in advance..so many problems!

Hayley's 2 posts
Briantist
sentiment_very_satisfiedOwner
2:32 PM
Hayley: You don't need any software, but you may need to do a retune, it depends on which "Pace HD" receiver you have.

As we know, "Freesat from sky" has "BBC one" chanel, and Freesat(BBC&ITV) also has channel "BBC one", can you tell me the difference between two "BBC one" ?

Rachel Roberts's 2 posts
S
StevensOnln1
sentiment_very_satisfiedPlatinum
3:49 PM
Rachel Roberts: If it's a generic satellite receive (rather than a Freesat box) then you will probably need to run a scan to find all the available channels. If you post the make and model of the box, someone may be able to offer more specific advice.