There has been a lot of debate about aerial "groups" over the last few years...


In the olden days of black and white, 405-line television, when the frequencies used were "very high" (VHF), the UK two-channel television service was provided using a just 100 transmitters and reception needed a standard aerial.

Later the system was upgraded to "ultra high frequencies" (UHF) for colour and now uses over 1,120 transmitters with more channels on more frequencies.

To enable the best quality reception possible, UHF television aerials are produced in a number of "groups". Each group is designed to operate on a range of channels, blocking all others. This is to prevent interference from "other" transmitters and to decrease losses on those required.

Each group is designated a colour, which is used to mark the aerial. Whilst wideband (black) aerials are designed to receive on all frequencies, their performance can be below a grouped aerial.

The transmitter pages now show a table like this:

The three sections show the three phases. The first is that before digital TV was introduced. This example shows that a group A (red) aerial would have received the original four channels but a group K was required to also receive FIVE. The channel number for FIVE on analogue is shown with an asterisk because it is "out of designated group", group A.

The second section shows the "digital with analogue" phase, where the transmitter has the analogue services from above with the new low power digital services. It can be clearly seen that on this transmitter a group A aerial will not receive any digital services at all, and that even a group K aerial will not receive the multiplex B service on C67. The only choice for digital reception here is a wideband (black) aerial because it is the only coloured band that crosses from left to right.

(You can also see that some of the digital services have plus and minus symbols. This indicates these transmissions use a 166.67kHz offset.)

The final section shows the designated frequencies that will be used for digital television after switchover. Whilst the public service multiplexes BBCA, BBCB, D3+4 are back "in group" (group A), to receive all the multiplexes, including the two potential new ones, the only choice here is wideband.

The performance of grouped aerials for each transmission channel was defined by the old Independent Television Commission (ITC) and is: 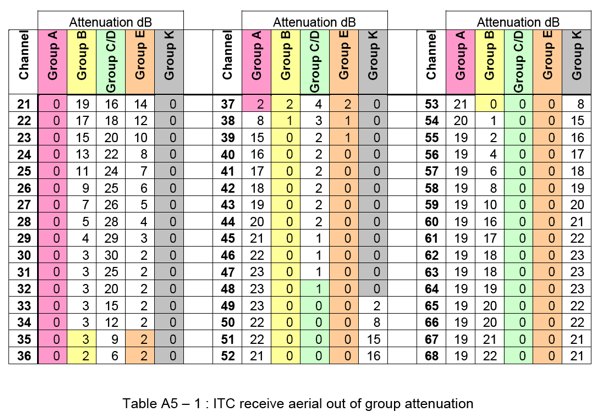 The larger the value, the lower the signal level possible.


Help with Freeview, aerials?
[][][
In this section
Comments
M
MikeB
sentiment_very_satisfiedPlatinum
10:58 AM
Brian Scott: You can check the transmitter for yourself, but its unlikely. Everyone blames the transmitter or the weather, but its seldom the case.

On the other hand, the thin bit of coax cable that makes your system work is highly likely to suffer from the effects of the weather, old age or simply falling of the back of the TV.

MikeB's 2,579 posts
D
David Bascombe
10:26 AM
Lyndhurst
how do you position roof aerial to get better picture quality without tech stuff??????

David Bascombe's 1 post
S
StevensOnln1
sentiment_very_satisfiedPlatinum
10:50 AM
David Bascombe: Use a compass to aim the aerial in the direction of the transmitter and use a signal meter to make fine adjustments until you find the sweet spot with the best signal strength.

StevensOnln1's 3,434 posts
L
leonard Horsfall
9:16 AM
I would like to know the grouping of my local transmitter which is Mankinholes Transmitter in Todmorden

leonard Horsfall's 1 post
S
StevensOnln1
sentiment_very_satisfiedPlatinum
12:06 PM
leonard Horsfall: Todmorden is current a Group B transmitter, however if you are having a new aerial it would be advisable to fit a wideband type in most instances in order to ensure your aerial will remain suitable for any future frequency changes.

StevensOnln1's 3,434 posts
O
Otto
9:28 PM
I am surrounded by transmitters (some relays/repeaters no doubt) but I can't find out which would give the best reception with a decent aerial so as to choose which aerial would be best. I am 6 km from the Bexhill one and could be in line of sight but holding up an indoor 9.99 aerial outside gives nothing. Heathfield at 299deg. is 26 km away and not much in the way but no signal. Due North which might be Hastings or Hollington Park masts at 1.6 and 3 km hidden from me gives a good signal holding the aerial above my head. If aerial on 1st story roof it gives nothing in any direction.

The aerials on near surrounding houses are in every direction. The Heathfield mast is Group BH - H? did I misread that? Heathfield and Bexhill have Horizontal polarisation but Hastings is Vertical - a problem if I buy H type but V is the best one?
Am I confused? Yes. How should I proceed - get a man in?

Go to the Digital UK Cioverage Checker at Digital UK - Coverage checker and enter your full post code and house number. Select the Detailed View box and then press the enter button. Scroll down and loom at the listings of the suggested transmitters for you to use. Select whichever gives the most green bars, not the aerial type needed (or use a wideband type), the compass direction for that transmitter and the channel number it uses.

Then ensure that you aerial is the correct type and is aimed at the correct compass bearing. Then manually tune your TV to the channel numbers given for each multiplex.

MikeP's 3,056 posts
S
StevensOnln1
sentiment_very_satisfiedPlatinum
10:40 PM
Otto: If you give us a full postcode we can see what the predicted coverage is for your location. H and V refer to the polarisation of the aerial, i.e. whether it is mounted horizontally (rods going side to side) or vertically (rods going up and down). In most cases you would be better off fitting a wideband aerial such as a log periodic type rather than a grouped aerial. Unless you know what you're doing, you would probably be better off getting a professional to install an aerial on the roof rather than attempting a DIY job.

StevensOnln1's 3,434 posts
J
John Dale
5:08 PM
I cannot always receive all the BBC Channels plus many others e.g. Sky Arts. The wideband aerial is in the roof space and aimed towards the Ridge Hill transmitter. The weather conditions s seem to affect the reception, on a good day the picture is perfect but rarely does this last for a week or so. Any suggestions to help improve the situation would be most welcome.

A full postcode would be needed to look at your predicted reception otherwise any comment or advice may not be relevant.