Have a Freeview HD or Freesat HD high definition Christmas 2012

It isn't just for the high definition Nurse Jackie, Downtown Abbey, The Snowman II or Doctor Who on Christmas Day ... Freeview HD or Freesat HD is a gift for every day of the year.


For the first time this year, everyone can enjoy the benefits of free-to-air high definition television. Freeview HD is broadcast to all homes in the UK, and Freesat HD beams the same services to everyone with a dish

What programmes can I watch at Christmas in high definition? 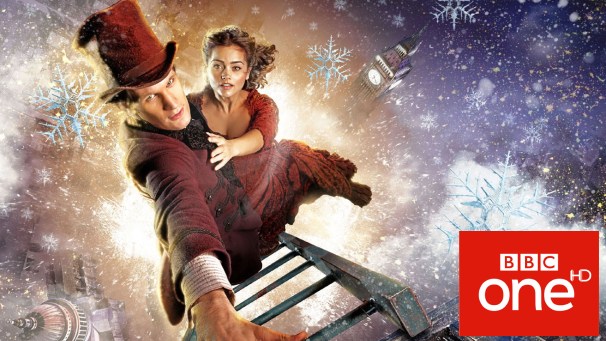 Doctor Who: Matt Smith, Jenna-Louise Coleman, Richard E Grant and Tom Ward feature in a Christmas 1892 tale - will the Doctor really abandon humankind or will he fight to save the world from the icy clutches of this mysterious menace? 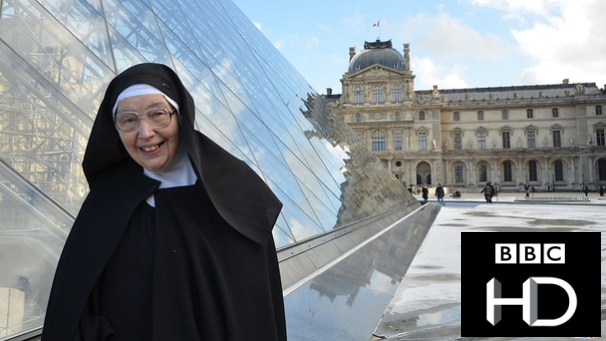 Arena: Sister Wendy And The Art Of The Gospel: An instant 1990's star, she glided around the world in her habit telling us the story of painting. But she revealed nothing of her own, extraordinary story. 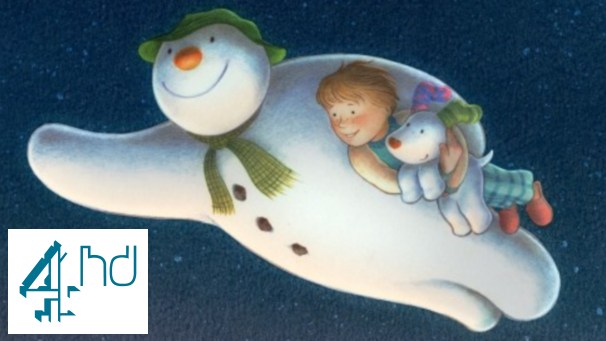 The Snowman and The Snowdog: the brand new charming sequel to the Christmas classic The Snowman which will be at the centrepiece of Channel 4's Christmas schedule this year celebrating a magical end to a special year. 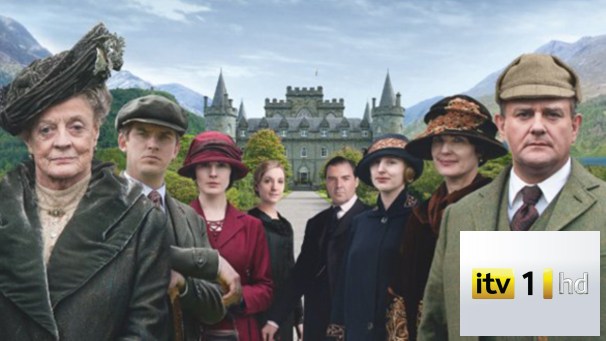 The Downtown Abbey family receive a warm welcome at Duneagle Castle, visiting Rose and her parents in the Highlands. But there is no disguising the tensions between their hosts. Carson is determined to keep the servants back at Downton working hard, but with a country fair coming up, will some be tempted to push their luck? Could romance be on the cards for Mrs Patmore?

Why would I want to upgrade to HD?


High definition pictures are much better for sport

One of the main improvements in high definition is the ability to provide much better motion for sport compared to standard digital television.

Clearer pictures for documentaries and drama

Many of the most popular high definition shows are documentaries and drama where the clarity of the picture gives a distinct edge to the viewing experience.

As movies have always been created on 35mm film (rather than videotape), this means that any movie created since the 1920s can be shown in high definition.

Another benefit of Freeview HD boxes is that they deal much better than standard boxes when you live in an area served by more than one transmitter. These boxes now prompt you to select your BBC and ITV region, older boxes just guess.

You may be able to watch in HD by pressing some buttons on your remote control - but you might need a new (HDMI) cable, or a Freeview HD or Freesat HD box. You have to ask yourself five questions:

Q1 Do you have a high definition television set?

The best two clues to look for are the "HD Ready" or "Full HD Ready" logos, and also that the television set has HDMI connectors.

If you have the manual for your television set, it may describe HD as "720 line" or "1080 line". If these are not mentioned, you don't have HD and you will need a new television set.

Q2 Does your HDTV have built in Freeview HD or Freesat HD?

Most HD televisions sold in the UK are "HD Ready", which means that they are capable of showing high definition pictures, but only from an external box.

Some, more expensive, TV sets have Freeview HD or Freesat HD built in.

If your TV set has the Freeview HD logo, it can receive what are known as "DVB-T2" transmissions, which means you get HD direct from the TV aerial connection. If this is the case, see Q4. If the set is "HD Ready with Freeview" it means you can't.

Some high end sets have Freesat HD built in, where you can watch the free high definition channels from satellite. For this to work you will have to use the satellite connection on the set. Remember that set will also have standard definition Freeview, so pictures from the normal TV aerial will not be in high definition.

Q3 If your HDTV doesn't have built-in reception - do you have a Freeview HD or Freesat HD box and the correct cables?

If you have an HD Ready television, you can connect it to an external set-top box to receive either Freeview HD or Freesat HD.

You must make sure that you connect the box to the television set using an HDMI cable. If you use a SCART lead you won't have HD.

Q4 Do you remember to switch to the HD versions of BBC One, ITV 1 or Channel 4?

You do not automatically get to watch BBC One, ITV 1 (or STV/UTV) or Channel 4 in HD. 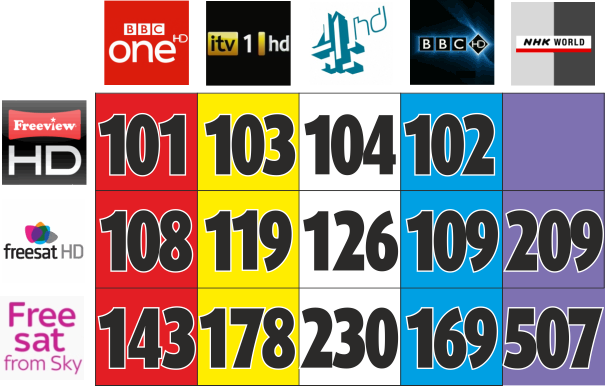 Q5 Is the HD channel actually showing an HD programme?

Only the BBC HD channel has a HD-only schedule. On BBC One HD, ITV 1 HD and Channel 4 HD non-HD programmes are shown "upscaled" to HD resolutions and look better than the pictures on the SD version of the channel. 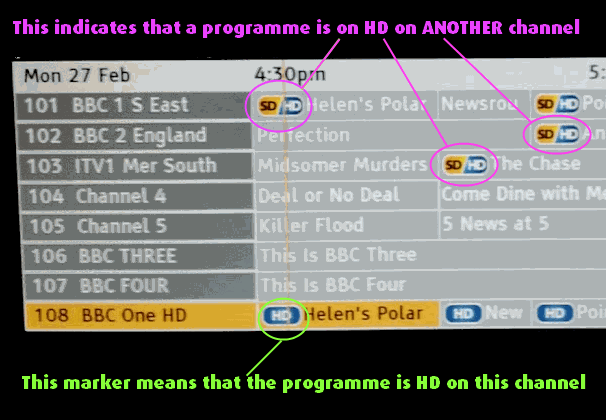 Check in the EPG (usually the INFO or GUIDE button on the remote) to see if the programme that is being shown has an HD marker in the listings.

As well as the basic Freeview HD and Freesat HD boxes, you can also purchase Freeview+HD and Freesat+HD boxes, which contain a hard disk drive (as found in computers) and two digital tuners. This allows, much like the popular Sky+ and Freeview+ boxes you to:

Where will it work?

Freeview HD and Freesat HD work everywhere in the UK. You need only a rooftop aerial for Freeview HD or a satellite dish for Freesat HD.

Help with High Definition?
[][][
In this section
Comments
T
trevorjharris
sentiment_satisfiedGold
11:37 AM
Actualy 4HD is now at 230 on Sky. It moved from 140 which is now 4seven. NHK World is on 507.

You can also get 5 HD on Freesat from Sky but you must have a sky card but no subscription needed.

You can get over 60 HD channels with a Sky subscription. He! He!

trevorjharris's 367 posts
T
trevorjharris
sentiment_satisfiedGold
11:52 AM
On the subject of remembering to switch to the HD version Sky have a system for doing this automatically. For instance 106 will give you Sky 1 SD if you have an SD box but will give you Sky 1 HD on an HD box. This is available to all broadcasters but BBC 1, ITV 1, Channel 4 and 5 have chosen not to use this system. It certainly makes things easyer.

Dave Lindsay's 5,724 posts
T
trevorjharris
sentiment_satisfiedGold
1:55 PM
Actually Dave I don't think any of the PSBs are under any obligation to provide HD services. For instance 5 does not transmit HD on Freeview. In fact there is a spare Freeview HD channel sitting doing nothing. It's about time the BBC found something to fill it.

trevorjharris's 367 posts
Briantist
sentiment_very_satisfiedOwner
1:59 PM
trevorjharris: The reason that the public service channels can't use the "HD replace" service on Sky is that they all have regional variations.

Channels 4 and 5 has them for adverts (five each) Spot Advertising Macro Map | Channel 5 and Macro Map | Interactive Map of Our Regions with Data .

ITV1 has the "contracts rights renewal" scheme, as well as local adverts and regional news.

BBC One has nations and regions and BBC TWO has nations - Which BBC regions are on satellite? | ukfree.tv - 10 years of independent, free digital TV advice .

This prevents them from allowing the swapping out of these services for a incomplete HD service.

Briantist's 38,844 posts
Dave Lindsay
sentiment_very_satisfiedPlatinum
2:01 PM
trevorjharris: I agree that the Public Service Broadcasters have an obligation to provide HD services but that isn't what I said.

My point was that the HD multiplex is a "PSB" and therefore available from all transmitters as a "Public Service" rather than the quasi-national Commercial (COM) networks.

Dave Lindsay's 5,724 posts
Dave Lindsay
sentiment_very_satisfiedPlatinum
2:04 PM
trevorjharris: The first sentence should say that "I agree that the Public Service Broadcasters **do not** have an obligation to provide HD services, but I didn't say that they did."

Dave Lindsay's 5,724 posts
Briantist
sentiment_very_satisfiedOwner
2:11 PM
trevorjharris: The reason that other channels on Sky *CAN* swap out their SD service for the HD one on the same channel number is that they are UK-wide services.

Which is why it would make a LOT of sense to stick BBC THREE HD and BBC FOUR HD (and BBC News from next year when they move to Broadcasting House) on satellite, just to get the number of BBC HD viewers up!

Briantist's 38,844 posts
Josh
sentiment_satisfiedBronze
2:42 PM
If anybody is just buying a Freeview box now, I would strongly recommend that they buy a Freeview HD box, even if they don't have a HD ready TV due to the fact that the box will be futureproofed for if the SD channels ever transition to DVB-T2. It is even more important in Northern Ireland due to the new "mini-multiplex" that uses DVB-T2 despite the channels on that multiplex being SD only. Also, if anybody is buying a new TV set, I would recommend only getting on with the Freeview HD logo on for the same futureproofing reasons as I just mentioned.

Cost isn't so much of any excuse anymore, considering how cheap DVB-T2 boxes have become.

Of course, I am not suggesting that everybody who already has DVB-T only equipment to bin it, but anybody buying anything new in terms of Freeview equipment, should only buy DVB-T2 only equipment!