Arqiva, the UK transmission compay, today launch a new digital radio multiplex in Oxford and the surrounding area to provide local digital radio stations to 300,000 listeners for the first time.


The Oxfordshire DAB multiplex will be the first of four new local multiplexes which Arqiva will launch following the Memorandum of Understanding on Local DAB Funding for Radio Switchover signed in June, by commercial radio groups, BBC and government.

The MOU on the switch from analogue to digital radio follows the huge success of digital TV switchover which completed in October. The Oxfordshire launch is the first stage of a six million pound investment from Arqiva which will result in further multiplexes being launched in Hertfordshire, Bedfordshire+Buckinghamshire and Northamptonshire early next year.

Paul Eaton, Director of Digital Radio at Arqiva said "Oxford is the first of four new local digital radio multiplexes which will deliver more choice and improved radio services to over 1.5 million people across the UK. Digital radio will open the door to smaller radio stations and local enterprises pushing local content and local talent to the forefront. By launching these multiplexes, we are demonstrating our commitment to the platform, driving improvements in coverage and increasing listening." 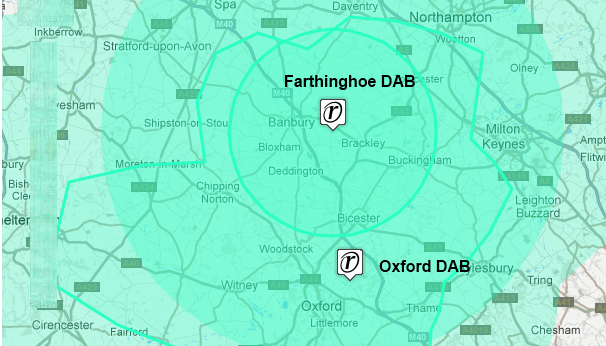 The launch is being held at the Oxford Science Museum and will be attended by Ed Vaizey, Minister for Culture, Communications and Creative Industries, who says "This launch marks a pivotal step in the journey towards digital radio switchover. This is great news for radio listeners in the Oxford area who will now be able to choose from a range of local digital radio stations at home and in their car."


Help with TV/radio stations?
[][][
In this section
Comments
John
12:23 PM
Wallingford
Shame 8 miles away from the transmitter in South Oxfordshire and I can barely pick up the Local stations on DAB. Signal strength is almost nothing. I am not convinced the map is accurate. We are line of sight with the transmitter and get a perfect Freeview signal. I suspect the DAB transmitter is very low down on the Mast.

John's 2 posts
D
David Pinfold
sentiment_satisfiedBronze
4:20 PM
John - Are you sure your Rdaio is tuning to channel 10B correctly ? I say this because although here in Banbury we have perfect line of site to Farthinghoe on 2/3 of my radios (2 tuner seperates & a Sony alarm clock /radio) I had to manually tune in 2 channel 10B.After doing this I get perfect reception. Check if your radio allows manual tuning try tuning channel 10B. Apparently some devices have problems tuning automatically below channel 11A

David Pinfold's 42 posts
T
Tony H
11:59 AM
I live about 15 miles SW of the transmitter and get good reception of DAB from Oxford, Hannington and Swindon. I can even detect the London services. But I got no usable signal from the new Oxford local service - until I turned the antenna to horizontal. It then gave me up to 99% signal strength. This happens with no other DAB service I've ever used. I'd swear the service is horizontally polarised if I didn't know otherwise.

I have been reading about the forthcoming Herts, Beds and Bucks DAB transmitters on channel 10D. However, I have been unable to find any projected coverage maps. Living in West Essex, I am currently able to receive in order of strength: BBC DAB, National 1 DAB, London 1, London 2, London 3, Kent and Essex services.

Note, Essex comes in at the weakest!

My question is, should I expect to receive a signal from 10D multiplex when it opens up at Easter time?

Thanks for your help.

Stephen Alden's 8 posts
A
andrewp
sentiment_satisfiedBronze
7:38 PM
John - You may have to wait for the Boars Hill transmitter which is coming in 2013, to improve coverage south east of the Beckley transmitter.

andrewp's 38 posts
T
Theflyingdodo
10:56 PM
The HBB & Northants multiplex on 10D is coming through nice & strong in Epsom. Reception is better than 12D Berks & North Hants & the DAB aerial is pointing at Hemdean! It's a funny ol' game!