The new TV channel will start within the next year or so, and will be on Freeview channel 8, Freesat and Sky channel 117. 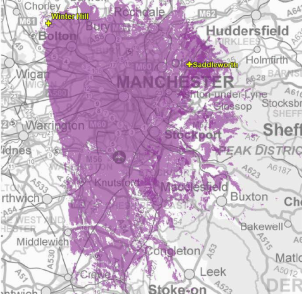 Ofcom still have five cities left to select the winner.


Help with TV/radio stations?
[][][
In this section
Comments
N
Nedbod
sentiment_satisfiedGold
7:21 PM
Is there really a hunger for local TV, Channel M didn't last all that long in Manchester and its vewing figures were very poor. It looked so amateurish compared with BBC / ITV, even with regard to local news cf Northwest Tonight & Granada Reports / Granada News.

Nedbod's 619 posts
Briantist
sentiment_very_satisfiedOwner
9:11 PM
Nedbod: Given the prominent Freeview, Sky (and Virgin Media and Freesat) placement for the channel, and the cross-subsidy from having cash from the extra channels on the multiplex it is quite likely that the local TV channels will work.

The difference from the BBC and ITV services is that they are for Manchester only, not all of Granadaland. Liverpool, Machester and Preston will have their own TV.

ITV and the BBC has to cover as far afield as the Isle of Mann.


Briantist's 38,844 posts
P
Phil
9:24 PM
Bolton
Yes but Your TV Manchester will cover other nearby towns, who are steadfastly NOT Manchester.
.
As will the Liverpool channel, try telling those from Southport they are Liverpool and expect their wrath.

Phil's 3 posts
Dave Lindsay
sentiment_very_satisfiedPlatinum
9:34 PM
Phil : As with those within the designated cities, those outside are not compelled to tune in or view the said services.

Dave Lindsay's 5,724 posts
K
KMJ,Derby
sentiment_satisfiedGold
10:38 PM
Phil : It is possible that people who work or shop in Manchester, but live in nearby towns or villages would welcome the chance to view local TV about Manchester.

KMJ,Derby's 1,811 posts
P
Phil
3:04 PM
Bolton
Dave& KMJ: As long as it's programming just covers Manchester and not the surrounding towns and try also NOT to imply that these towns are a part of that city.
.
But I fear it will cover other nearby towns and do exactly that ( imply they are part of Manchester) which we are NOT.