Why does BBC Worldwide not make more profit for the Licence Fee payer?

BBC Worldwide is a private company wholly owned by the BBC. It used to make profits - which reduce the Licence Fee - of between 16% and 21%, but has managed much less since 2004, despite sales of over one billion pounds. So, where is the £595 million?

In particular the revelation the " BBC agreed to fund £687k payoff after executive's move to commercial arm - Media - theguardian.com "

"The BBC agreed to fund a redundancy payoff of nearly £700,000 to a former senior executive using licence fee money, after she moved to BBC Worldwide, the corporation's commercial arm. "

It has always struck me that BBC Worldwide seems to be operated as a plaything of the BBC management. So I have gone though the entire Annual Reports from BBC Worldwide (BBC Worldwide Annual Reviews) and plotted the income and profits. As they date back to 1995, I have adjusted the values using the Retail Prices Index. 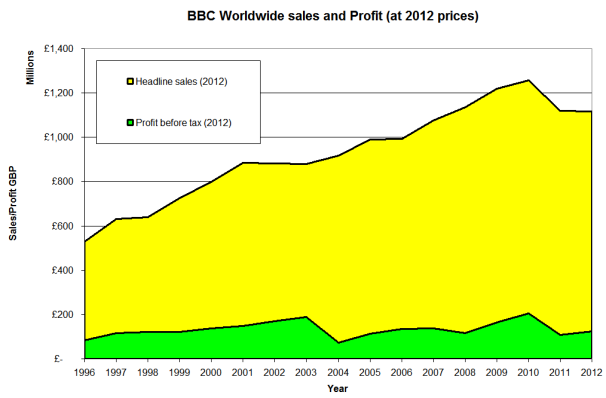 It does appear that over the years, BBC Worldwide has tripled the income, but the return to the Licence Fee payer has been poor. Looking at the percentage profit made, you can see:

This does rather suggest that BBC Worldwide is performing poorly in terms of the income it makes to reduce the Licence Fee.

If BBC Worldwide had maintained the average performance between 1995 and 2003, which was 18% profit, the BBC would have had an extra income during Mark Thompson director-generalship of £595 million (at 2012 prices).

Which is rather more money than the alleged £30 million wasted on management payoffs.

But what can be done?

The best suggestion I can come up with is to convert BBC Worldwide into a public liability company, with perhaps 51% of the shares remaining with the BBC. You could argue that would provide a much needed cash reserve for the BBC's UK operations, and going forward BBC Worldwide plc might be keener to make a profit with shareholders, rather than BBC managers, keeping a watchful eye.

I would be interested to hear if anyone has any better ideas.


Help with TV/radio stations?
[][][
In this section
Comments
F
Fred Perkins
4:15 PM
What doesn't seem to be reflected in your original note, nor in the discussion, is that the BBC is LICENCE FEE FUNDED... and BBC Worldwide has become a commercial organisation, taking privileged advantage of its roots, in going well beyond the BBC's remit, and actually COMPETING with other broadcasters. It is distorting competition.

The BBC's vast resources have been used to drive, and often distort, developments in TV. Using the excuse that BBC World "returns money to the licence fee payer" is pretty lame. The BBC has no remit to compete commercially with the many broadcasters in the same market, who do not have vast amounts of guaranteed cash at their disposal, and no obligation to behave commercially.

The BBC has gone far beyond its original purpose, which was to ensure that the UK public had access to standards of TV which might not be provide without public subsidy.

The BBC has gone far beyond this, and arguably should be reduced to its core purpose, rather than play in commercial markets on the back of privileged access to programming which can be created without financial constraints which apply to its commercial competitors.

The BBC has for years been obsessed with ratings - at almost any cost.

It is currently operating with a guaranteed income of nearly £5 Billion per year - and rising, as more come into the licence fee net. Almost as much as BSkyB has to earn every year, on a commercial basis.

All this to provide "impartial public service broadcasting".

The question isn't so much whether BBC Worldwide is earning enough, but rather why it exists at all ?

Maybe government should sell it off to the private sector, with consequent benefit to the government's purse; and at the same time abolish the licence fee and let the BBC be funded out of royalties from the privatised BBC Worldwide??

It was set up a separate company for that specific role.

BBC Worldwide has never, ever been "LICENCE FEE FUNDED" as you state.

The market is outside the UK, and sells programming, etc in the same way that everyone else does. Besides, once that programme is made for the UK, would you prefer it sit on a shelf, never to be seen again? By selling that programme abroad, it offsets the cost to the license fee payer, is a sensible use of resources, and to do otherwise would illogical and unbusiness-like.

Sky actually has an income of £7.25 billion http://corporate.sky.com/…res, makes a profit of over a billion (we will refrain from mentioning its 'interesting' tax history), and has no PSB requirement.

The BBC has some £5 billion in income (about 20% from commercial activities), but the licence fee has been frozen for the last three years (and will be for a further three), the £264 million that the FO paid to fund the World Service (probably the cheapest soft power ever) is to be stopped, with the BBC funding that as well. £150 million a year for rural broadband (why?), £25m for rural broadcasting, and the costs of S4C, etc. BBC licence fee frozen at £145.50 for six years | Media | theguardian.com .

So its real world income is gradually falling, its expected to pay for a lot more, and of course it has a PSB remit; indeed, if its was not for the PSB sector, many of the people currently using Freeview would get nothing at all. And although it has to consider ratings, its hardly likely that it would make many of the programmes it does if ratings were its main objective.

I suspect you have an ideological objection to any state run organisation having more than a token presence, yet I'm sure that the reality of a minimalist PSB would be one which you would be uncomfortable with.

Looking at the US template,there would be no drama (PBS buys theirs in, mostly from the UK!), no comedy, no sport (too expensive), and current affairs would tend towards the safe, with constant fear of government criticisim (the GOP tried to defund PBS some years ago, even through the amount the US spends on PBS is minimal).http://www.pbs.org/#

Documentaries would be good, there would be childrens shows, and there are excellent programmes on both radio and TV , but you would see and hear constant drives for funds, mentions of corporate/foundation support and even the chance to donate your old car for local public radio. And don't think American's are universally happy with their current system - this is a very interesting discussion about its future The Future Of Television | The Diane Rehm Show from WAMU and NPR

True, its certainly not National Lampoon's 'European Vacation', and its 4 channels showing cheesemaking, but the BBC gives a breadth of programming that is difficult to match, certainly for the money that we pay yearly. Frankly, we get a bargain.

There is one other reason to keep the BBC in its current form. As one ITV exec said many years ago, 'it keeps the rest of us honest'.

MikeB's 2,579 posts
T
Trevor Harris
sentiment_satisfiedGold
9:44 AM
@mark
Ofcom had to give permission for lowering the bitrate to 64k. They had a public consultation which showed that the public were against the plan. As this was not what ofcom wanted they did their own "research" which contradicted the public consultation.

"Ofcom had to give permission for lowering the bitrate to 64k."

That relates to commercial DAB multiplexes only.

Ofcom have never regulated audio quality or bit rates on the BBC's national multiplex. This is the responsibility of the BBC Trust.

Mark's 181 posts
S
Shrimper1
3:16 PM
Sorry to come into this conversation late, but I was employed as an cost accountant by Ford Mo Co for most of my working years.
However, thru sporting contacts I was once unofficially invited to attend BBC's "social club" @ Shepherds Bush. I've been to some sports club bars up and down the country, but this was like drinking in heaven - as I'm pretty sure it was a permanent policy of free-drinks for all!
Needless to say, a new "hands-on" BBC Financial Director (worth his salt), from any top Company or multi-national in the UK or Europe, would tear up the unofficial BBC expenses book, and bring major order to proceedings! He won't be popular, but name me a GOOD popular accountant? ............. exactly! So it's a straight decision by the BBC "Gods" - either take the medecine, or keep taking the Pxxxx!

Shrimper1's 14 posts
R
rob
sentiment_satisfiedSilver
11:19 AM
BBC have always sold tv shows abroad, now they have subscription BBC in USA and Australia. and other parts of the world... and what revenue they get from that? ITV sold their tv shows aboard too... ok they have to make money out of it.. fair enough.. But Why should we carry on paying TV licence for? there are hundreds of channels via satellite and 80 odd on freeview... Make BBC as a subscription service then people can make up their own mind to view BBC or not... this is an fairer way of doing it.

rob's 171 posts
S
StuartT
11:13 AM
"But Why should we carry on paying TV licence for? there are hundreds of channels via satellite and 80 odd on freeview... Make BBC as a subscription service then people can make up their own mind to view BBC or not... this is an fairer way of doing it."

I'm sure that would be the government's dream, Rob. The TV Licence wouldn't disappear, the revenue would simply go into the general taxation pot as it does in most European countries.

The BBC would become much smaller, less influential and provide a far worse service. NOBODY watching TV would be financially better off.

StuartT's 14 posts
C
Colin Swan
5:29 PM
Dingwall
The BBC is now far too 'big for it's boots' and has long since given up on it's founding mission statement which was to uphold the Christian morals of the population.
As a PBS (Public Service Broadcaster) it has changed completely by vying for 'big audience' programmes and this is for no real reason at all - only the egos of those in charge at BBC.
Commercial broadcasters certainly require big audiences to satisfy charging advertisers - however the BBC is guaranteed it's enormous income even if no one watches the programmes- The TV licence is a very unfair compulsory TAX and needs to be abolished.
BBC should be subscription only and people who wanted their programmes could pay for them.

Colin Swan's 12 posts
Briantist
sentiment_very_satisfiedOwner
7:22 PM
Colin Swan: God alone knows where you get the idea that the BBC has anything to do with "Christian morals of the population" either now or in the past. If you have a reference I would like to know it, but the current Royal Charter makes it clear that the BBC serves everyone, whatever their faith or - as is more likely in the UK - lack of it.

The British definition of PSB is that it provides a service for everyone. That means 'big audiences' (thus BBC One) and 'minorities' (such as BBC Four for people with an education, and BBC three for those still obtaining one).

"The TV licence is a very unfair compulsory TAX and needs to be abolished" - I think Ishot that particular duck on Does the BBC or BSkyB spend more on programmes? | About UK Free TV | ukfree.tv - 11 years of independent, free digital TV advice . No one is making YOU pay the TV Licence. You can choose to not own a TV, it's not compulsory.

"BBC should be subscription only and people who wanted their programmes could pay for them." is an opinion.