Looking at the top three European replacements for the TV Licence, today we have a closer look at the French system. 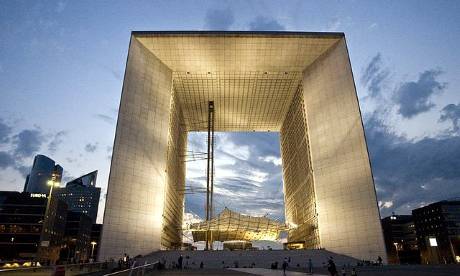 You open the letter from your local council to find that it is notification of next year's charges.    Whilst making the claim that the tax has been frozen, you can't help notice that the amount you pay seems to have gone up.

Looking at the small print, you see a new line on the bills saying "Broadcasting contribution".

Inside the letter is an explanation: the TV Licence has been replaced with a new tax that is payable by all UK homes as an add-on to the Council Tax.

The letter says that the amount you pay depends on the "band" you pay your local tax.   It says the annual payment is:

In addition to this, a 25% Single Person Discount can be claimed.

It also says that if anyone in the household is over 75 years of age, they can claim the whole amount back as a rebate.    It says that the old TV Licence system should have passed this onto your new bill if this was the case.

In addition – it says – that you can get a discount in the first year of operation for every month you have an old TV Licence.  As it turns out, your old one runs out at the end of March.

The leaflet also says that this is much easier for you, as you have one less direct debit to deal with each month.

The system would be very similar to the current one, but would have two distinct advantages.   The first is that it would rely on an existing, working collections system.  This would reduce the collection costs overall and be easier for the payer.

By removing the need to prove the use of a television set, the system would be made much simpler, and the ability to pay would closer match the charge made.


All questions
[][][
In this section
Comments
S
steve p
sentiment_satisfiedGold
3:52 PM
You do not mention an opt out for non TV users. There IS such provision in France,

steve p's 1,173 posts
Briantist
sentiment_very_satisfiedOwner
3:56 PM
steve p: That is not under consideration here. This is a simple levy on all households as it is simple to use BBC services without having a TV at all.

Briantist's 38,844 posts
M
michael
sentiment_satisfiedGold
5:12 PM
As the new levy would include BBC online services, it should be a function of the average download speed. Many of us cannot get enough mbps for streaming etc. (Ideally it should also be reduced in conformity with the ever worsening average quality of service offered by the BBC - but they would not countenance that ! )

michael's 857 posts
Ian
sentiment_satisfiedGold
5:54 PM
Again why should some pay more than others for the same service. If there dose need to be a charge for the BBC (and personally I think they should compete for viewers and funding like everyone else) then it should be per house not per person and the cost should be the same for everyone.

Ian's 497 posts
Briantist
sentiment_very_satisfiedOwner
6:01 PM
michael: I can't really see that working. Given that I, for example have Hyperoptic 1000Mbps at home and 4G though Three's 4G, how on earth would Newham council know that?

Ian: Once again, if you have progressive taxation - Progressive tax - Wikipedia, the free encyclopedia - people pay according to what they have, not what they get.

Let us remind outselves at this point that the new Minister, Mr Whittindale has described what you want as "a poll tax". Scrap TV Poll Tax and some DRM - top Tory .

Briantist's 38,844 posts
Ian
sentiment_satisfiedGold
7:36 PM
Well he is a Tory so is speaking utter tripe as they usually do!

Ian's 497 posts
Ian
sentiment_satisfiedGold
7:40 PM
You keep saying there's 4G, not everywhere, there is supposed to be 4G in Leicester but good look getting it, some places still struggle for 3G and home broadband is utter pants in some places.

Ian's 497 posts
Briantist
sentiment_very_satisfiedOwner
9:34 PM
Ian: I'm not sure if I have ever claimed 4G is everywhere... It not rolled out yet so I'm not sure why I would say it.I was just saying to michael that it would be .. Expensive .. To calculate the broadband speed to a property because there's so many ways to do it. I just meant as an example that I have two non ADSL services.

Briantist's 38,844 posts
Fred Perkins
8:54 AM
There's merit in all the possibilities being mooted (and a few others) to replace the TV Licence.

What hasn't been recognised though, is that governments rarely, if ever, walk away from existing tax-raising measures. They just transfer them elsewhere.

The TV licence has indeed become an anachronism, and now sits in the same group as things like National Insurance and Vehicle Tax - ways of raising money, but not actually connected to government expenditure , except in name.

The BBC will continue to be funded by government, come what may. . What the BBC needs to do whatever job the current (new) government decides might well be quite different from the 'tax' raised.

The TV "tax" will raise at least £4 Billion a year. Given the digital era, there are lots of ways the tax could be "nominally" be spent - on funding culture and the arts; on simplifying copyright compensation for rights holders who don't see payments for the use of their source material; subsidising broadband rollout where uneconomic; for funding disability access to all sorts of things; for innovation to help Britain maintain its worldwide stature in the creative industries.... But all these are just a means of government getting reasonable acceptance that turning the 'voluntary' licence fee into a tax that is easier to collect and could quietly be used to raise extra cash to spend on new areas.

There's little point in people debating whether they get what they individually perceive as "value" for the new tax, whether it's broadband speed or their lack of interest in BBC programmes.

Basicly, everyone will get access to whatever the BBC is funded by government to provide as a public service. And we'll stop all the nonsense of detector vans, criminal prosecutions and arguments that "I never watch the BBC".

Fred Perkins's 9 posts
D
Darren
9:29 AM
The interesting thing about this system is where would people who are exempt from council tax stand on this one. In our house we have one person over 65 and two people registered disabled and our council tax is 0.00 every year because of this.

If they do opt for this plan there should be some way of opting out or helping people who are less fortunate if they actually can't afford a TV, otherwise it's going to be going down the same route as the bedroom tax and the poll tax, with many people who are unable to afford it finding themselves either homeless or on the wrong side of the law.

Also Briantist "This is a simple levy on all households as it is simple to use BBC services without having a TV at all. " - this is not always the case, if people want to use the BBC services even via a computer or a youview/playstation/xbox the first thing they've got to get is some kind of laptop or computer, or youview/playstatin/xbox (which you need a TV or monitor to plug it in to) and also a valid internet connection to watch it on - which also excludes quite a number of rural areas where internet speed struggles to exceed 2mbps.

Also the BBC do have a way of blocking people who do not pay their TV licence/broadcasting levy from viewing iPlayer - and really they should do. If you try going to HBO USA it asks you to login with your subscription details, this also verifies which country you live in. If you go to BBC iPlayer it's totally open, if your abroad and you go to BBC iPlayer you will only see the international version of iPlayer, not the UK one, but if you use a VPN you can see the UK iPlayer from abroad without paying any TV licence fee to the BBC. If the BBC had a system that asked you to register for iPlayer and validated either your TV licence number of council tax number as having paid the licence fee, like HBO does then it would restrict the number of people watching iPlayer without paying anything. I know there would be nothing to stop someone just sharing their licence number with friends abroad, but it would provide at least a little bit of extra protection.