When will I get a new Freeview aerial because of even more mobile broadband?

What is going to happen during the 700MHz clearance? To make way for more mobile broadband in 2020, millions of Freeview viewers are going to need to act. A very few will need a new aerial. Will that be you? 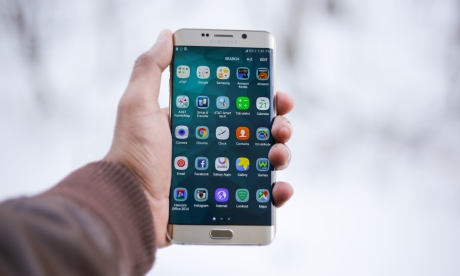 What is 700MHz clearance?

Digital TV makes much more efficient use of the UHF broadcast frequencies. This has meant that nine old frequencies used by TV (C61 to C69) could be sold to Three, EE, Vodafone and O2 for use by mobile phones to access the internet at higher speeds than before.

The ever-growing demand for mobile internet - that works reliably when traveling, inside shops and offices - means that Freeview will need to vacate more broadcast channels (C49 to C60) in about four years’ time.

This can be done without reducing the available TV and radio channels, but it will mean retunes for all Freeview viewers – and new TV aerials for about 10% of homes in Greater Manchester, Cheshire, Merseyside, Somerset, Bristol, County Durham, Oxfordshire, Dundee, Dover, Carmarthenshire, West Sussex, North Devon, the Scottish Borders and the north of Northern Ireland.   These new aerials will be provided and fitted for free. 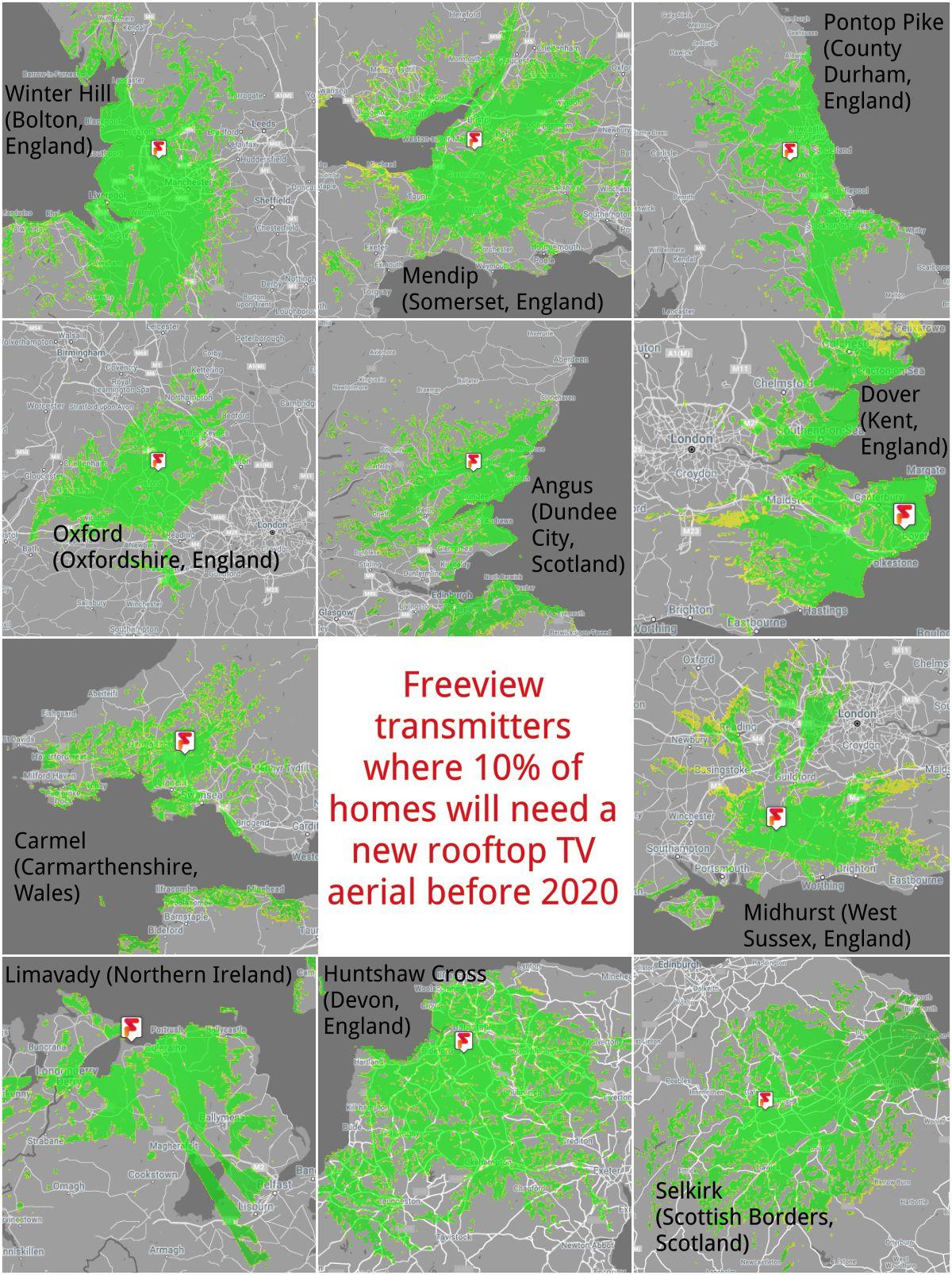 Things that we know

We know that Ofcom and the government are committed to allocating the former TV broadcast frequencies in the 700MHz band to mobile broadband from 30 June 2020:

How are the current Freeview broadcast frequencies used? 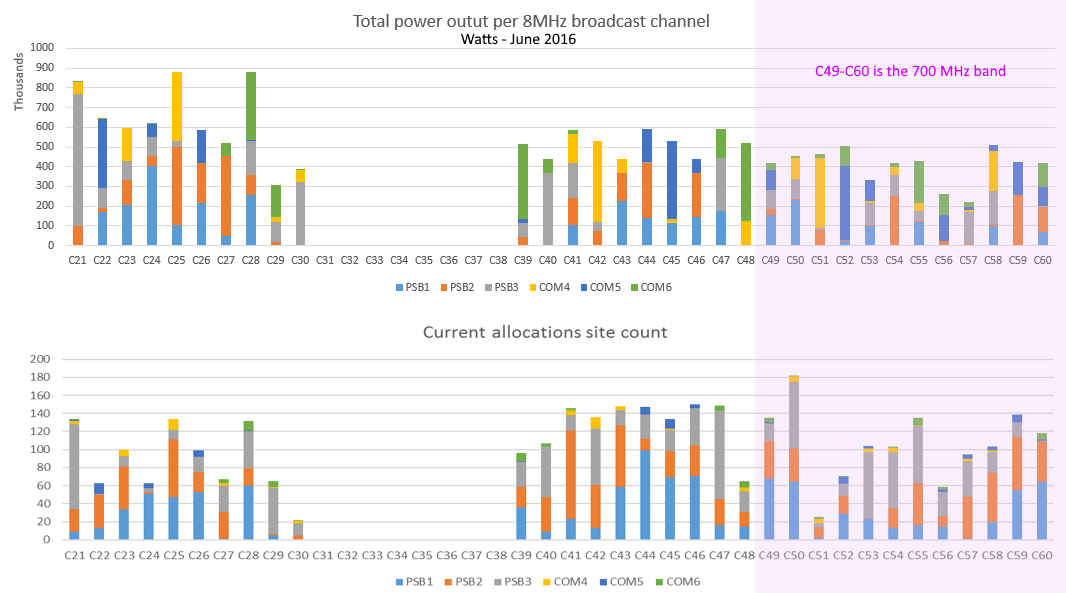 This is going to be an issue for homes in some transmitter areas that watching the “extra” Freeview HD channels on the two temporary multiplexes called com7 and com8 – which shows these Freeview channels:

...and are using a “group A aerial”.   Most homes have long-since switched to using a wideband aerial, but if you haven’t and live in these places you might not be able to watch the above channels after com7 and com8 change frequencies:

If you run a professional performance venue (for concerts or theater) or make TV (live or recorded) shows you will probably make use of radio microphones or short-distance links for audiovisual.     Before 2012 you will have been using “C69” for these, and had to have the equipment changed to C48.

Because Freeview is going to work with twelve less broadcasting channels from 2020, it will be necessary to use C48 for Freeview.     Also many TV studios (say, Sky News) also make use of unused Freeview channels for radio microphones and they simply won’t be able to find unused channels from mid-2020.

Ofcom has provided PMSE new frequencies away from the old TV ones, but this will mean another equipment upgrade as well as using digital technology to make better use of the new band.

Since the start of the previous 4G services, a very small number of Freeview viewers have had to fit “filters” or have had their rooftop aerial amplifier removed.    This was done by “at800” who provided any home with the necessary equipment for free.

The same scheme will be run for those people now in the top band, which is about 1% of Freeview homes, which will then run from July 2020 onwards, presumably as “at700”.

What is the schedule for these changes?

There are several good reason for leaving the changes until as late as possible: newer Freeview equipment is able to re-tune when network changes happen, and it will take time to locate the actual aerials that will need replacing.

The first event will need be a “national retune” for Freeview HD users and those places using C51 (Emley Moor, Dover, Sandy Heath, Redruth, Beacon Hill and others) C55 and C56 (Mendip, Sudbury, Waltham, Huntshaw Cross) effected by the movement of com7 and com8 to a national SFN.

The 2009-2012 digital switchover process suggests that rest of the process will be done on a region-by-region basis.    This time it might be....

No changes will be needed at Cambridge, Channel Islands, East, East Midlands, East Yorkshire and Lincolnshire, London, the rest of Scotland, West Midlands and Yorkshire.


Help with TV/radio stations?
[][][
In this section
Comments
M
moriety
3:40 AM
For David Brigden:

I live about two miles from the Crystal Palace mast and can almost never get any HD programmes, and as I live on lower ground but far enough away shouldn't constitute a problem given the distance.

A radio engineer might better explain the problem, but those under a transmitter suffer the same poor service as those folk in remote area's do (if the antiquated 1950's system remains the same whilst loading it up with evernew technology and government ignoring the fact the the entire system needs an overhaul)

Well said. Mind you, people think I'm weird if I don't have my phone with me, even when I've just popped out for some shopping.

Most annoying is Barclays 'fraud detection' - I like the idea, but it keeps tripping in, and assumes I have my phone with me all the time. Recently, I had to leave ASDA without my grocery shopping, as my card had again been errornously flagged, and ASDA had no provision for me to call the bank, so they ultimitely lost the sale.

Yea, I know, some people will read this and think "You;ve just demonstrated a good reason *to* take your phone everywhere" but, meh, shouldn't be my problem.

David, have you ever had similar problems with respect to bank cards/fraud checks when you are out?

Anyway, sorry, this was totally off-topic.

More on topic, and not directt David, I disagree with the general "vibe" in these comments.

When we are talking about TV's, it's a mainly untechnical consumer market. These are people who don't change all their equpment every few years, and why should they?. I know many people annoyed with the Freeview switchover, but at least they were compensated with extra channels, but now? I'm sure they'd love to be "forced to replace the tele just so the kids can use their phones even more.(!)"

And again, last time, many people I iknew (particularly the elderly) would NOT accept a messy set-top box, and 2 remote controls (or a cobbled reporgramable hybrid) . The only way my gran could deal with it was that we had to get her a new TV. If she was still alive, doing that again would be a hard sell, and she was financially well-off.


Jamie's 5 posts
Brian Wright
sentiment_satisfiedBronze
9:58 AM
Another example of Ofcom and the government not giving the whole process a forward thinking that gives a decent time scale when the Freeview concept was planned and thought out. I know electronics moves quickly but we seem to be wasting money etc by tinkering "around the edges. Take DAB radio what a farce this has been with most users preferring FM. Whats happening to DAB +.? We should have changed to this years ago.
Have the organizations that plan the changes to broadcasting and telecommunications given any thought to future Ultra High Definition TV transmissions being transmitted on Freeview .? Perhaps another black box via satellite. I think not.

Brian Wright's 77 posts
J
John Martin
sentiment_satisfiedSilver
12:06 PM
I love how we have,nt even got 4k terrestrial tv sorted out yet and Japanese etc are trying to push 8k. What a farce. And the rubbish the companies throw out we must have it. No we don,t. All they mean is their sales have dropped and they want us to buy more televisions that we don,t really want

John Martin's 103 posts
N
Nick Anderson
sentiment_satisfiedSilver
11:24 AM
It is high time the major high street retailers realised that they need to stock DAB + radios and to phase out those that are not capable of receiving DAB + in the shortest possible time. At the moment they seem to be making very slow progress in this direction and to stop importing those radios that do not support the new.

RJ's 92 posts
S
StevensOnln1
sentiment_very_satisfiedPlatinum
3:25 PM
RJ: Frequency allocations are co-ordinated internationally in order to minimise interference problems. Frequencies for Whitehawk Hill have always been co-ordinated with the frequencies used by transmitters in Northern France, where a similar program of frequency changes is also underway to clear the 700MHz band across France.

StevensOnln1's 3,432 posts
R
R Nicholson
5:04 PM
Morpeth
Post Code NE61 1RF. After 2 years of relatively trouble free, freeview tv, I have recently started having problems with freezing, pixilation, and loss of signal to some channels. Aerial checked and found ok. Just had at800 fit a filter. But have totally lost ARQ A (channel 59, 77800) group. Aerial is pointed at Pontop pike, although the standard information says I should be on Morpeth repeater transmitter. How has my reception changed. ?

Post Code EH21 8DF .. Seven blocks of six flats & no one gets good signal here ever, When do we get new aerials? Council did own all the flats but some have been brought now & aerials on roof of each block supplying each flat.
Map says Jul-Dec 2018 council will not put new one's up so every one has to have Sky.